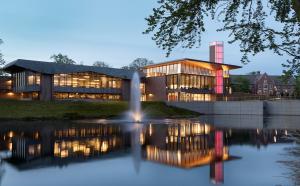 The Mission Driven Campaign for Rose-Hulman has transformed our campus and prepared us to better meet the challenges of being a top STEM college focused on undergraduate education.”
— Robert A. Coons, President, Rose-Hulman Inst. of Tech.

The Mission Driven Campaign for Rose-Hulman has brought substantial support in the following areas:
• $127 million for student scholarships and financial aid.
• $81 million for the Fund for Rose-Hulman.
• $30 million for new spaces to expand networking and learning; and
• $12 million for faculty support, global and diversity initiatives.

The campaign raised $50 million over the past year alone and more than $100 million since 2018.

“The Mission Driven Campaign for Rose-Hulman has transformed our campus and prepared us to better meet the challenges of being a top STEM college focused on undergraduate education,” said Rose-Hulman President Robert A. Coons. “We’re grateful for the commitment by so many in support of providing our students with the world’s best undergraduate STEM education in an environment of individual attention and support.”

Coons noted that to remain at the forefront of STEM higher education, Rose-Hulman needed to recruit and retain leading-edge faculty and staff, attract academically strong students throughout the world from a wide range of socioeconomic and ethnic groups, modernize facilities and equipment, and stay ahead of technological change. Other key strategic goals were continuing to increase retention and expansion of hands-on experiences for students that are giving them an edge in the job market and graduate school applications.

Significantly increased student scholarships throughout the campaign helped drive enrollment among students, including those from diverse socioeconomic, ethnic, and cultural backgrounds. Recent examples include:
• Alumnus and Board of Trustees chair Niles Noblitt and his wife, Nancy, established the Noblitt Scholars program with a $10 million gift.
• Linda and Mike Mussallem, an alumnus and trustee, added a $4.1 million scholarship gift supporting students from northwest Indiana and the Chicagoland area.

Additional gifts supported the creation and expansion of key spaces and programs on campus.
• A $15 million lead gift from a donor helped pave the way to build a new $29 million, 70,000-square-foot academic building, opening for the 2021-22 school year;
• More than $16 million from Lilly Endowment, Inc. supporting several Rose-Hulman initiatives such as Ask Rose Homework Hotline, PRISM, ESCALATE, and Mindful Connections.
• A $10.5 million gift from Linda and Mike Mussallem paved the way for the $21 million expansion of the institute’s Mussallem Union, dedicated in May 2018.
• The 13,800-square-foot Richard J. and Shirley J. Kremer Innovation Center, opened during the 2018-19 school year, expanded opportunities for students to enhance their hands-on, collaborative educational experiences.

“These new workspaces, laboratories and classrooms provide our faculty with the tools to in turn provide our students with the skills desired by industry throughout the world and the nation’s leading graduate and doctorate programs,” said Jeffrey A. Harrison, president and chief executive officer of Citizens Energy Group in Indianapolis, who served as the campaign co-chair with Thomas Dinkel, president of Terre Haute-based Sycamore Engineering. Both are Rose-Hulman alumni and trustees.

Additionally, the proceeds from the campaign supported the installation of new synthetic turf, creating two multipurpose fields used for athletics, recreation and intramural activities. The auction of a McLaren P1 hypercar owned by alumnus Felda Hardymon brought in a world-record $2.39 million, which supported the endowment of the Alfred R. Schmidt Chair for Excellence in Teaching, reinforcing the development of transformative learning experiences in the classroom.

Steve Brady, vice president for institutional advancement, noted that the campaign received financial support from many groups, including alumni, friends, corporations, foundations, faculty, staff, and parents. This broad-based support helped Rose-Hulman surpass its ambitious fundraising goal, even within the challenges of the recent COVID-19 pandemic.

“Our supporters were driven to help us achieve our campaign goal,” Brady said. “Our alumni value their Rose-Hulman experiences and all of the elements that went into their educations, including our dedicated, caring and talented faculty and staff. They wanted to make sure the institute remained on the cutting edge and, most importantly, a leading force in undergraduate STEM education.”
Rose-Hulman is consistently recognized nationally as an elite STEM school for distinctions that include faculty excellence, return on investment, value-added, and career services.

Coons adds that the success of the Mission Driven Campaign is guiding Rose-Hulman toward its future. “Administrators, faculty and staff are already examining short-term and long-range strategic initiatives for the future. Some of those goals will be announced later this year.”
“Rose-Hulman is a place that continues to evolve and improve to meet the challenges of higher education’s changing landscape,” said the president.

About Rose-Hulman Institute of Technology
Founded in 1874, Rose-Hulman Institute of Technology is dedicated to preparing its students with the world’s best undergraduate science, engineering and mathematics education in an environment infused with innovation, intellectual rigor and individualized attention. The institute is consistently recognized nationally as an elite STEM school for distinctions that include faculty excellence, return on investment, value-added, and career services. Career placement is near 100 percent year after year. Located in Terre Haute, Indiana, Rose-Hulman has an enrollment of approximately 2,000 undergraduate students and nearly 100 graduate students. Learn more at rose-hulman.edu.

IMAGE ATTACHMENT DESCRIPTION:
Here is a link to a Dropbox with images showcasing successful areas of the Mission Driven Campaign for Rose-Hulman: https://www.dropbox.com/sh/qtw714ezju7u1ai/AADEu5SoIYsr1FcY31TqvKfYa/Photos?dl=0&subfolder_nav_tracking=1
Please credit: Rose-Hulman Institute of Technology/Bryan Cantwell

ROSE-HULMAN B-ROLL VIDEO:
Video showcasing areas of Rose-Hulman’s campus impacted by areas of the Mission Driven Campaign for Rose-Hulman can be found at the following Dropbox:
https://www.dropbox.com/sh/qtw714ezju7u1ai/AABr3V6qr9o6GyMuSasTus9Aa/Video?dl=0&preview=Rose-Hulman+Mission+Driven+Video+v3.mp4&subfolder_nav_tracking=1
Any portion of this b-roll segment can be used with this news release.