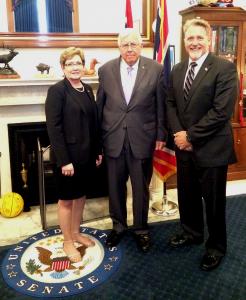 A strong supporter of knives as essential tools is lost.

It is with great sadness that the American Knife & Tool Institute (AKTI) and those of us who personally knew Senator Enzi mourn the loss of a friend and supporter.”
— Jan Billeb

“It is with great sadness that the American Knife & Tool Institute (AKTI) and those of us who personally knew Senator Enzi mourn the loss of a friend and supporter,” said Jan Billeb, AKTI Executive Director. “We could not ask for a stronger champion for rational legislation and responsible government. Senator Enzi never wavered in his commitment to his constituents and as a powerful advocate for what he believed in.”

Senator Enzi, a Republican, served the nation and the people of Wyoming in the U.S. Senate from 1997 until 2021. Mike was well known as a consensus builder in Washington, D.C. From 2015 until his retirement from the Senate, he chaired the Senate Budget Committee, encouraging federal fiscal responsibility.

When AKTI Executive Director Jan Billeb explained the issue of multiple varying state and local laws regarding knife possession that knife owners face traveling to hunt, fish, or other activities to the Senator in 2013, he completely understood and offered to champion legislation to protect knife owners. He promptly found a co-sponsor in Senator Ron Wyden, Democrat representing Oregon, for legislation to give federal protection to knife owners traveling similar to what gun owners have enjoyed since 1986.

While the legislation eventually passed the Senate in 2018 by unanimous consent as the Interstate Transport Act, political debate on Capitol Hill over funding and shutdown made it impossible to move further. Re-introduced in 2019, the Interstate Transport Act passed the Senate Commerce Committee but stalled even with tremendous effort by both Senator Enzi and Senator Wyden and their staffs.

“We were pleased to award both Senators Enzi and Wyden for their tireless work to provide federal protection for lawful knife owners from the current patchwork of state and local knife laws with the AKTI ‘Common Sense Award,’ said CJ Buck, CEO, Buck Knives and AKTI Legislative Chair. “It was an honor and great privilege to work with someone so dedicated as Senator Enzi and his staff.”

“Knives are an essential tool for hunters and various occupations and the right to carry them with you when you’re on the road is something that should be protected,” Enzi said on accepting the award. “With thousands of knife laws across the country, our legislation provides a common sense solution that respects the rights of states while providing the protection that knife owners need to ensure they can travel without fear of prosecution.”

“We look forward to working with Senator Wyden to get this needed protection for knife owners passed,” said Buck, “and complete the effort that Senator Enzi never wavered in his commitment to accomplish.”