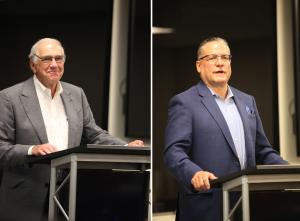 Raymond G. (Butch) Ames has stepped down. Jerry Ouimet has been appointed the position of President and Chief Executive Officer.

BURNSVILLE, MN, USA, July 27, 2021 /EINPresswire.com/ — Industry leader Ames Construction, Inc. announced that effective July 20, 2021, Raymond G. (Butch) Ames has stepped down as President and Chief Executive Officer. He will remain Chairman of the Board of Directors for the Company. A longtime advisor to the Company, Jerry Ouimet has been appointed the position of President and Chief Executive Officer. In announcing his new position, Mr. Ames expressed his gratitude for his co-shareholders, John Ames, Ron Ames and Mark Brennan, and for the contribution and leadership of Ames founder Richard Ames. Together, they grew the family business over the last 60 years. He also expressed appreciation for the many loyal and dedicated employees who have helped make Ames the successful company it is today. During his remarks, Mr. Ames stressed that Ames Construction has been built upon a rock solid culture of loyalty, honesty, integrity and innovation and is in a strong position with a stable workload and a healthy future. Mr. Ames continued: “Although the only constant in our industry is change, the Company must not lose its culture or core values, which stress continual development today of the leaders of tomorrow, being committed to our employees and their families and contributing to our communities.

In introducing Jerry Ouimet as the new President and Chief Executive Officer of Ames Construction, Mr. Ames said that Jerry Ouimet has the skills and character necessary to lead the Company through the next critical years.

Mr. Ouimet has a wide range of experience and is known and respected in our industry. He is tough but fair, is an excellent communicator and, most importantly, has the same can-do attitude that has made the Company one of the most successful enterprises in our industry.

In speaking of his new position, Mr. Ouimet said, “This is a great company and it is an incredible honor to for me to be asked to join the Ames Construction family. I want to thank the Board of Directors for this opportunity, and I look forward to working with our many skilled professional field and office employees and building on the incredible foundation we have today.”

Headquartered in Minnesota, Ames has regional offices and projects throughout the United States. The Company is recognized as a leader in the Commercial, Energy, Transportation, Mining, Rail, Renewable Energy, Water and Wastewater industry sectors. Ames Construction ranked 73rd in Engineering News-Record Magazine’s 2021 list of the top 400 contractors.