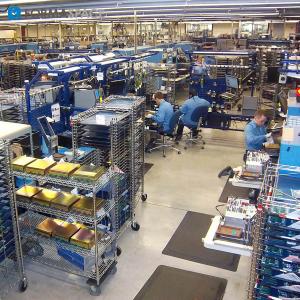 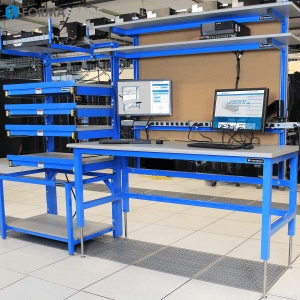 We built this custom server “condo” rack system for a major computer manufacturer; it allows technicians to test 5 servers at a time, which reduced countertop space usage by 37%.

This installation for a Silicon Valley tech company features push-button height-adjustable work surfaces that allow workers to set their preferred work height, as well as built-in ESD protection and over 20 integrated power outlets.

Looking for insight into technology trends for 2021? Check out our top 10 emerging trends that will drive change in the tech market in 2021.

Here are the top 10 emerging trends that will drive change in the tech market this year and beyond.

The start of 2021 was marked by widespread manufacturing shutdowns—not caused by coronavirus outbreaks in factories— but a crippling shortage of computer chips that find their way into everyday consumer products, ranging from phones to computers, to new cars and trucks. Bloomberg estimates that the auto industry may lose over $61 billion in sales during 2021 due to these acute chip shortages. Explanations for the shortfall vary, but analysts point to Huawei stockpiling chips throughout 2020 (in advance of a US export ban) as well as extraordinary demand for high-performance chips from Taiwan Semiconductor Manufacturing Company (TSMC).

Efficient batteries and electric motors rely on rare earth metals such as lithium and other materials that are in short supply, especially outside of China, which has invested heavily in rare earth mining.

The result may throw a wrench into the Biden administration’s favored plan (inspired by a whitepaper written by the UAW) to promote EVs as a way to boost the economy with green jobs. It may also mean that major companies will face difficulties meeting their goals of switching over to 100% EV production (GM by 2035, Ford by 2030).

2. Solid State Batteries, Wooden Skyscrapers, And Lab-Grown Chicken Nuggets: Ideas That Could Save The Planet

Climate change has been on everyone’s mind as a polar vortex swept south this month and brought the Texas electrical grid down to its knees, leaving millions (including most of us at Formaspace) without power or even access to water for several days.

Our second tech trend is a renewed focus on climate change resiliency and the adoption of new technologies that can reduce harmful carbon pollution into the atmosphere.

As Bill Gates writes in his new book, “How to Avoid a Climate Disaster: The Solutions We Have and the Breakthroughs We Need,” there are five areas he believes we need to focus on:

1. Reducing the 51 billion tons of greenhouse gases emitted each year.
2. Manufacturing, especially cement and steel production, amounts to the biggest chunk (31%) of greenhouse emissions, bigger than transportation by car, truck, or plane.
3. We need green alternatives to power a world that currently consumes 5000 GW of energy each year – or alternatively, we need to consume less.
4. Space is a consideration. Some green solutions take up vast land areas, including wind farms or biomass cultivation.
5. As always, money is the big issue but so is informed decision-making. Yet, how can we prioritize what actions to take if we don’t understand the relative costs of investing or doing nothing.

3. Forget 5G. StarLink Is The Future.

Space is back, as anyone who watched the heartwarming success of NASA’s Perseverance Rover successfully touching down on Mars will attest. If all goes right, we’ll see an unprecedented rollout of exploration technology in the coming days, including NASA’s remarkable Mars Ingenuity Helicopter set to fly across the Martian landscape.

But, barring the discovery of actual Martians on Mars, there’s a space technology development closer to home that may have a greater immediate impact.

StarLink reports it already has over 10,000 customers, a number that is sure to grow thanks to increased demand for high-speed Internet access and remote locations, fueled by work from home types who want to live the cabin-in-the-woods lifestyle.

If StarLink lives up to its promise, this type of near-earth satellite communication system may prove to offer far more tangible benefits than the rollout of terrestrial-based 5G cellular services, making it our 5th tech trend of 2021.

4. All IT Infrastructure Is Compromised All The Time

Our next tech trend is frankly a bit dispiriting.

Over the past year, we became aware of major hacking attacks that have infiltrated computer systems—once considered to be very secure—at large government agencies and major private corporations.

Equally troubling is the infiltration of enterprise software monitoring products from Austin-based SolarWinds, which allowed foreign actors (presumably Russians) access into nearly every major US government agency and quite a few prominent corporations as well.

And this month, we’ve seen the first publicly reported attempt to hack into public utilities where the motivation appears to be, frankly speaking, to cause physical harm. The incident took place in Florida at a small water treatment facility, and the as-yet-unnamed hacker used remote login software to increase the concentration of water treatment chemicals to a dangerous degree, which, if it had not been discovered by chance, could have caused countless injuries or death to the public.

Even the recent new hardware from Apple is not immune, as security analysts report hackers have crafted new malware for Apple’s homegrown M1 chips.

‘New York Times’ cybersecurity reporter Nicole Perlroth, who has written a new book on cyber threats facing the US, This Is How They Tell Me The World Ends, is very pessimistic. She writes that there is an active market for new computer hacking discoveries, and in some cases, government spy agencies around the world, like the NSA, choose to pocket these hacks rather than reveal them in order to crack into other government systems.

What is the tech trend here?

The reality is we may have to drastically change our assumptions about computer security – and start to assume all the systems we use on a daily basis are vulnerable and may have already been compromised in some way.

This change of mindset will require a major rethink on whether we can safely store confidential data in computer systems in the future.

5. The End Of Social Media As We Know It

The public internet is tracking the history of radio, an industry which in its early stages was dominated by enthusiastic amateur broadcasters, later followed by the emergence of corporate broadcasters, and finally dominated by a few national networks (Columbia, DuMont among others), which fell under Federal regulations by the newly minted FCC in 1934.