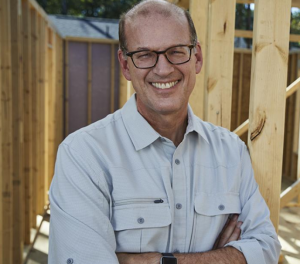 The RESNET 2021 Virtual Conference is an online event for anyone working in or around the residential building industry such as HERS® Raters, builders, code and government officials, sustainability advocates, appraisers, architects and more.

In his keynote address, Jonathan will cover Habitat for Humanity’s commitment to sustainability, how RESNET and Habitat for Humanity work together, and the role of certified RESNET HERS Raters in meeting the organization’s goals. Following his comments, he will join RESNET Executive Director Steve Baden on a wide-ranging conversation of how the two organizations can work effectively together.

Drawing upon his decades of experience ranging from Wall Street to a local church, Jonathan has led the global nonprofit’s tremendous growth. Through his management, Habitat has grown from serving 125,000 individuals a year to helping more than 5.9 million people last year alone to build strength, stability, and independence through shelter.

Jonathan is deeply influenced by his parents, who were active in the civil rights movement, and by his grandmother, U.S. Congresswoman Millicent Fenwick, widely known for her commitment to justice. Jonathan seeks to follow in their footsteps by leading Habitat’s efforts to draw nearer to a world where everyone has a decent place to live.

His path to Habitat was neither immediate nor direct — with stops at Goldman, Sachs & Co.; the 1988 Olympic Games in Seoul, South Korea; Marriott; The Walt Disney Co.; Musicland; Best Buy; and Christ Presbyterian Church in Edina, Minnesota. Every position prepared him to lead Habitat with a passion for the mission, tireless commitment to the work and bold vision for the future.

He is the author of Our Better Angels: Seven Simple Virtues That Will Change Your Life and the World, which provides practical inspiration to bridge the divisiveness of the day. He is a noted speaker and sought-after contributor to home affordability conversations throughout the U.S. and around the world.

Jonathan serves on the boards of the Federal Reserve Bank of Atlanta, is the chair of Leadership 18 and is a member of the Freddie Mac Housing Advisory Council. He is also a member of the Council on Foreign Relations and the Urban Steering Committee for the World Economic Forum.

Jonathan holds an MBA from Stanford and a Bachelor of Arts in political science from the The University of North Carolina at Chapel Hill, where he was a Morehead Scholar. In 1986, he was awarded a Henry Luce Fellowship.

He and his wife, Ashley, have three children and live in Atlanta.

Under his leadership Habitat has made a solid commitment to sustainable affordable housing. This leadership includes working with RESNET to involve certified RESNET HERS® Raters participating in Habitat for Humanity affiliate projects.