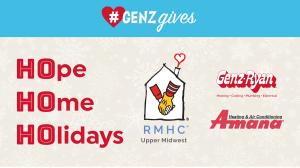 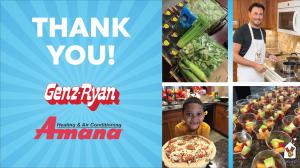 Thank you Genz-Ryan and Amana! 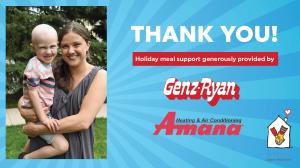 Genz-Ryan’s generous gift greatly assists us in being able to offer three meals a day and snacks to more than 100 parents and caregivers daily. We are so thankful for this vital and timely donation.”
— Jill Evenocheck, President/CEO of RMHC-UM

MINNEAPOLIS/ST. PAUL, MINNESOTA, UNITED STATES, November 24, 2020 /EINPresswire.com/ — Genz-Ryan, Minneapolis/St. Paul’s most trusted industry leader in plumbing, heating, cooling, and electrical, has partnered with Amana to gift $25,000 to the Ronald McDonald House Charities, Upper Midwest that will fund their meals during the holiday season – and also a few surprises along the way!

Beginning on Thanksgiving Day and lasting through New Years Day, Genz-Ryan’s donation will provide meals for the families living in the Ronald McDonald House Charities, Upper Midwest. The added bonus – these meals will keep numerous locally-owned restaurants busy during the COVID19 lockdown – a much-needed relief for the owners and staff.

“Pediatric illnesses and emergencies have not gone away during the global health crisis and families with critically ill and injured children still need our support,” said Jill Evenocheck, President and CEO of Ronald McDonald House Charities, Upper Midwest (RMHC-UM). “Genz-Ryan’s generous gift greatly assists us in being able to offer three complimentary meals a day and snacks to more than 100 parents and caregivers daily, particularly impactful over the holiday season. We are so thankful for this significant and timely donation,” said Evenocheck.

Spread good cheer.
If you would like to spread hope this holiday season, visit https://www.rmhtwincities.org/GenzRyan/, and you too can help this worthy cause.

###
About Genz-Ryan
Genz-Ryan is a family-owned and operated company since opening its doors in 1950. Founded on the basis of one simple goal, Genz-Ryan still stands behind the founding philosophy of providing the highest quality services and delivering uncompromising customer satisfaction. Today, Genz-Ryan is an industry leader and recognized innovator in plumbing, heating, cooling, and electrical.