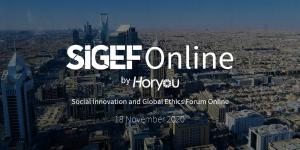 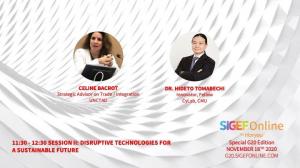 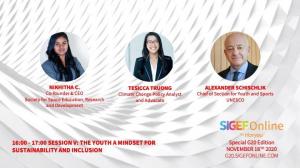 Session 5: The Youth A Mindset for Sustainability and Inclusion

GENEVA, SWITZERLAND, November 20, 2020 /EINPresswire.com/ — On Wednesday November 18th 2020, the Horyou Foundation and Horyou, the Social Network for Social Good, were holding the ninth edition of the Social Innovation and Global Ethics Forum, the SIGEF Special G20 Edition, and its second online edition which was streamlined from Geneva. Held prior to the forthcoming G20 meeting in Saudi Arabia and aptly titled "Advancing Sustainability for the 21st Century", it ambitioned to urge the gathering of the most powerful global leaders to focus on the challenges and openings that would result from advancing sustainability, inclusion and cooperation in a world stricken by an unprecedented pandemic, within the United Nations SDGs Framework.

Purposely held prior to a G20 summit, SIGEFOnline Special G20 Edition perpetuated the now well established line of its previous eight editions, bringing together representatives from the UNCTAD, UNESCO, WTO, UNCDF, EU Commission, as well as government officials, business executives, NGOs and representatives of civil society, academia and the arts, to set the ground for a constructive reflection and sharing of views and propositions on some of the most critical contemporary issues, including disruptive technologies, women and youth empowerment, climate change and inclusion. It even went further in two aspects.

Firstly and most notably, about half the speakers belonged to the younger generation as, alongside sessions dedicated to disruptive technologies, partnerships and women empowerment, three out of five of the explored themes were of particular interest to and carried by the youth; namely, "Climate Change: Making Room for Hope", "The Youth: A Mindset for Sustainability and Inclusion", and "Sports for Good: Sharing after Cheering".

Second notable aspect: this edition went beyond presenting analyses, views and propositions to actually make clear practical recommendations to the world leaders who are attending the G20 summit.

Quash fear of the future

Unsurprisingly, SIGEFOnline Special G20 edition, was not a trial of the past but a resolute look to the future and how to make it something to look forward to for everyone, everywhere. Hence, all recommendations were geared towards urging the most advanced of powerful nations to share knowledge, science and wealth in order to quash any fear of the future that many a young person around the globe may today express. From AI to the IoT and blockchain, and through medical care, finance, education, and information, including social media, The speakers of the sessions dedicated to "Positive Partnerships for the Advancement of the SDGs" and "Disruptive Technologies for a Sustainable Future" urged the G20 summit to foster public/private sectors cooperation and partnerships and use advanced technologies, as well as space alternative solutions, to further freedom of speech and human rights, as well as cooperation and regulation in order to ensure equitable sharing of wealth and the creation of job opportunities to include all regions, continents, age groups, genders, and communities around the world, as well as overcome all sorts of socio-economic problems, including pandemics.

The need to call for and make available a larger participation of developing countries, and of working on the viability of investments in those countries to foster sustainable, transparent and predictable world trade environment was also stressed.

There is an urgent need to send a message of hope – pleading "Let our voice be Heard" -, as requested by the Director General of the International Chamber of Commerce of Geneva for whom the three key words are Unity, Solidarity, and Proximity. Proximity was also stressed during the session on "Women Empowerment: The Promise of a Better World", the most important thing being to provide all women with the tools to become the better version of themselves by making them part of a network and by giving them access to financial services and to new markets. In a very inspiring note, the session also articulated the message that women are mothers of life, and now is the time to encourage a much larger inclusion of Women in positions of leadership and decision making in both Public and Private ecosystems.

Regarding climate change, the recommendation is to go beyond the fear of sacrifice and to look for new opportunities in terms of a better quality of life for all, including new job opportunities. Opportunities also include turning carbon dioxide into an ally, as it is possible and advisable to produce eco-friendly fuel out of it.

Don't Be Scared; Get moving

Ultimately, the message and strongest recommendation was one of asking the world leaders to not be afraid to deconstruct and get moving in order to construct a better future. That would be the strongest message of hope. And the best example of "get moving" attitude came with the "Sports for Good: Sharing after Cheering" session which insisted on the spirit of "participating" and seeking self-achievement and contribution to peace and social inclusion.