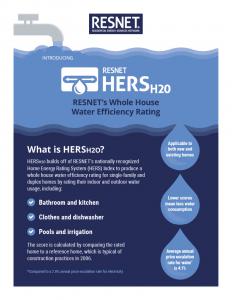 RESNET is excited to enter this new chapter of rating homes for water efficiency and looks forward to our continuing support of the WaterSense program.”
— RESNET HERSH2O program director Ryan Meres

This exciting news brings RESNET one step closer to using HERSH2O, as a program for issuing the WaterSense label for homes. RESNET’s current WaterSense Providers will transition to HERSH2O Providers by the end of 2020 as WaterSense moves closer to implementing version 2.0 of its home labeling specification. All current RESNET Quality Assurance Providers that wish to become HERSH2O Providers can complete the online application form.

Once WaterSense transitions to version 2.0 of its new home specification, HERSH2O can be used as a performance-based approach to achieving the WaterSense label. RESNET will be assisting with the eventual launch of WaterSense version 2.0 by participating in a pilot program. RESNET and EPA recently signed a letter of intent (LOI) to collaborate on a WaterSense V2.0 pilot program.

The LOI specifies that it pertains to homes in the Las Vegas, Nevada region, but RESNET may add more markets upon notice to EPA. To obtain the WaterSense label, homes in the pilot program must achieve a HERSH2O score of 70 or less and meet a simple checklist for WaterSense version 2.0. This new version of WaterSense provides significantly more flexibility and design choices for builders seeking the WaterSense label for their homes.

RESNET HERSH2O program director Ryan Meres commented, “RESNET is excited to enter this new chapter of rating homes for water efficiency and looks forward to our continuing support of the WaterSense program”.

"WaterSense is pleased to expand our long-running partnership with RESNET.” Said Jonah Schein, National Program Manager for Homes and Buildings at EPA WaterSense. “The Version 2 pilot program and eventual release of Version 2.0 of the WaterSense labeled homes program will make WaterSense more available to builders and raters alike.”