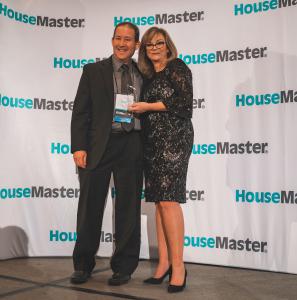 “We’ve been putting so much energy and time into making this our best year yet, and this recognition from HouseMaster validates everything we’ve been striving for,” said Stuart Malamut. “This award means a lot to us and we are grateful for the continual support from the HouseMaster community and our fellow franchise owners across the U.S. and Canada.”

The Malamuts have been growing their business as they service the people of Greenville, Lyman, Spartanburg, Anderson, Arcadia and their neighboring communities. Stuart Malamut is both NIBI and ASHI certified. He is also certified to measure radon levels and provides termite inspections.

HouseMaster President and CEO Kathleen Kuhn and the corporate team hosted the conference and event, honoring the success of franchise owners over the past year and celebrating their lasting impact on the home inspection industry. Many of the HouseMaster owners that serve over 325 locations across the United States and Canada gathered in Colorado for the annual gathering.

This was a very special conference for the HouseMaster family as the brand celebrated its 40th anniversary of franchising this year. HouseMaster is known for its strong commitment to customer service. HouseMaster holds a Net Promoter Score of 92 (a customer satisfaction ranking higher than Apple and Ritz-Carlton). Franchise Business Review has named HouseMaster a top franchise brand since 2009.

“Every year we take advantage of this opportunity to recognize some of HouseMaster’s top performers — owners who take a great deal of pride in mastering their business through our system,” Kuhn said. “We are thrilled to celebrate this achievement alongside Stuart and Tracey. They embody what makes our franchise family so very special.”

To connect with the Malamuts directly, call (864) 990-4203 or email stuart.malamut@housemaster.com.