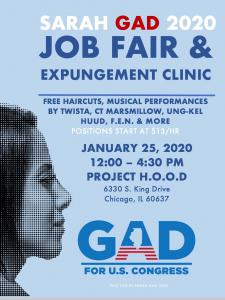 Congressional candidate and Woodlawn resident Sarah Gad will be hosting a job fair and expungement clinic at Project H.O.O.D Communities on January 25th.

This past week, the Congressional candidate announced a second campaign job fair, which will bring in employers like Amazon and the U.S. Census, and will include a free expungement clinic led by volunteer attorneys and law students. The event, which already has over 800 shares on Facebook, is expected to include performances by local artists like CT Marsmillow, Ung-Kel Huud, and prominent American Rapper Twista.

Gad's campaign says that they are still welcoming employers to participate in the job fair portion. All employers must be background-friendly and pay a starting wage of at least $13 per hour. "We want to bring in a broad spectrum of industries to accommodate as many interests as possible," says Gad. "The goal of this event is to help employ as many people as possible and also get people excited about the upcoming election."

Gad is a third-year law student at the University of Chicago and outspoken advocate for re-entry and criminal justice reform. Her activism and philanthropy work in the realms of criminal justice reform and civil rights earned her the 2019 University of Chicago Humanitarian Award. Gad is running as a Democrat against 27-year incumbent Bobby Rush. If elected, the 32-year old will become the nation’s first formerly incarcerated female legislator.