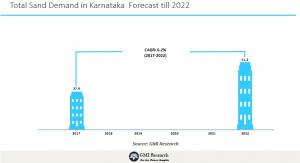 The demand for sand is growing at a significant rate across India. The total sand demand in Karnataka is projected to touch 51.2 Million MT by 2022.

GURGAON, HARYANA, INDIA, August 22, 2019 /EINPresswire.com/ — The urbanization in India is growing at an unprecedented level due to migration of people from smaller towns and villages to bigger cities in search of jobs and a better life. As more people move to urban areas the demand for housing and infrastructure will go up eventually driving the demand for construction material. In India the construction boom has increased the demand of sand by many folds in the last 2-3 decades which is putting a lot of pressure on the traditional source of sand supplies i.e our rivers and causing harm to aquifers, fisheries and protected areas. This has led to a shortage of sand and making it a scarce commodity in some parts of India and there were times when the construction industry almost come to standstill or moved at a snail pace due to the shortage of sand. Karnataka was forced to seek an alternative source of supply and imported river sand from Malaysia and Tamil Nadu floated tenders to import sand to overcome the sand shortage.

Natural river sand has been used in construction for centuries but the unsustainable level of river sand mining has depleted our rivers which takes centuries to form. The river sand mining has caused dropping of water levels, erosion of river banks and floods during rainy seasons. Countries across the globe are facing this challenge and some of them are switching to M Sand or Crushed sand as an alternative to river sand. In India M Sand is very popular in the state of Karnataka as there are currently 120+ M Sand plants are operating there. The reason for higher adoption is due to shortage of river sand and the availability of raw material granite for M Sand production in the state. M Sand is getting some tractions in other southern states due to sand shortage which is pushing builders to move to M Sand. Apart from the shortage of sand, higher prices of river sand is also creating room for M Sand as it is much cheaper and end-users have been welcoming M Sand due to frequent fluctuations in river sand price and availability. The ability to continuously avail M Sand at a much cheaper cost compared to river sand provides end-users with confidence and consistency of material quality and availability. This leads to huge cost savings on all concrete applications and stability in the design mix of concrete.

The demand for sand is growing at a significant rate across India. The total sand demand in Karnataka is projected to touch 51.2 Million MT by 2022 growing at a CAGR of 6.2% from 2017 to 2022. The sand market will be driven by infrastructure projects and real estate sector. The Indian Real estate sector which comprises of housing, retail, hospitality, and commercial is expected to reach 1 Trillion USD by 2030.

In the last couple of years, M Sand has emerged as an alternative to river sand in some states. The M Sand is produced by crushing rocks to form powder and it involves 3 stages of crushing, initially the boulders of less than 500 mm are crushed in Jaw crusher then aggregates moves to cone crusher and finally the M Sand is produced in VSI crusher (Vertical Shaft Impactor) and the sand is further sieved using high-speed screens to remove particles less than 150 microns, different stages of screening ensure proper grading for better particle size distribution. Only the M Sand which is produced using all these 3 stages complies with IS: 383 Zone II.